Statement of the Bavarian Farmers' Association: In many places animal agriculture is the only way to produce food.

Myth: In many places in Bavaria, animal agriculture is the only way to produce food.

The statement is based on the assertion that there are many areas in Bavaria on which no plants edible to humans can be cultivated, but only feed for animals. In fact, slightly more than one third (35%) of the agricultural area is permanent grassland and is mainly used to grow grasses for feeding dairy cows and fattening cattle ([2], p.6). However, this permanent grassland is not natural primeval grassland (steppe, savannah) due to low rainfall or the climate, but anthropogenic grassland that was formerly forest [4]. Both rainfall and nutrient content of the soil allow the cultivation of plants edible to humans. Solely areas that are difficult to access for agricultural equipment are unsuitable for selective plant cultivation. In Bavaria, these are alpine pastures. However, they account for just 1% of agricultural land. Only 3% of Bavaria's fattening cattle and 0.3% of its dairy cows are fed with grasses from these areas [5].

Without animal agriculture, however, a large part of the agriculturally usable area is not needed anyway, so that both the very small proportion of light pasture land can remain uncultivated and the grassland - where it makes sense - can be further renaturalized (e.g. by converting it into forest, moorland). Additionally, portions of cropland used for forage can be reforested or converted to biodiverse grasslands.

The fact that humans are not dependent on animal food was officially confirmed by the American Society for Nutrition in 2016, among others. Accordingly, a purely plant-based diet is suitable for all stages of the life cycle, including pregnancy, lactation, infancy, childhood, adolescence, older adulthood and for athletes. The consumption of animal products, on the other hand, is the cause of certain diseases, including ischemic heart disease, type 2 diabetes, hypertension, certain types of cancer and obesity [8].

The University of Oxford confirms in a study that plant-based nutrition is both the healthiest and most climate-friendly [7]. It is a scientific consensus that the production of animal products requires many times more land than the production of plant alternatives. Concrete figures are not publicly available for Bavaria, but a global meta-study by Oxford University shows the inefficiency: worldwide 83% of agricultural land is used for the production of meat, aquaculture, eggs and milk, while these products provide only 18% of food calories and 37% of protein [6]. In Bavaria, about 60% of the agricultural land is used for animal agriculture [22], but this value increases significantly if the area used for the production of imported animal feed is included. 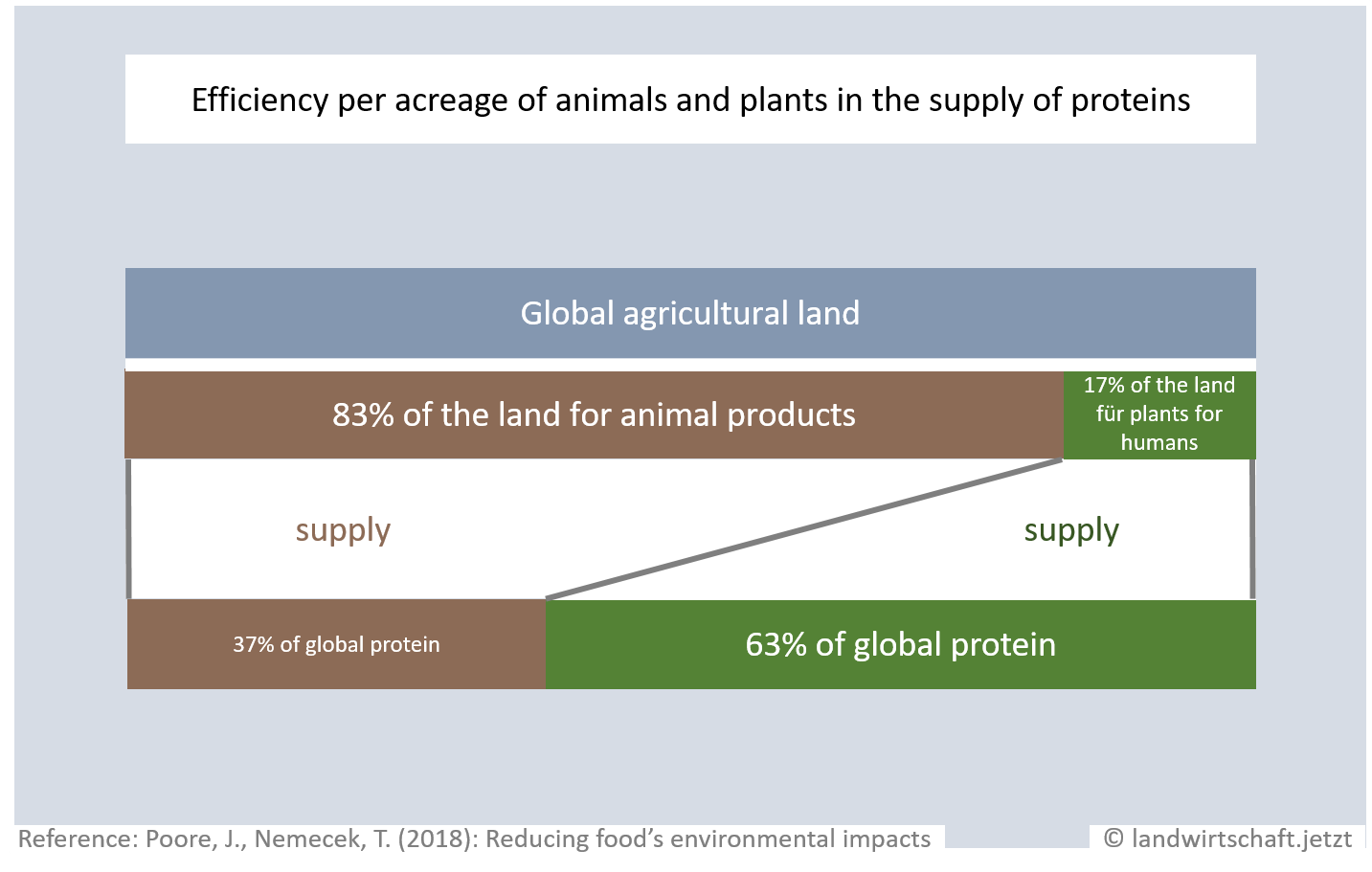 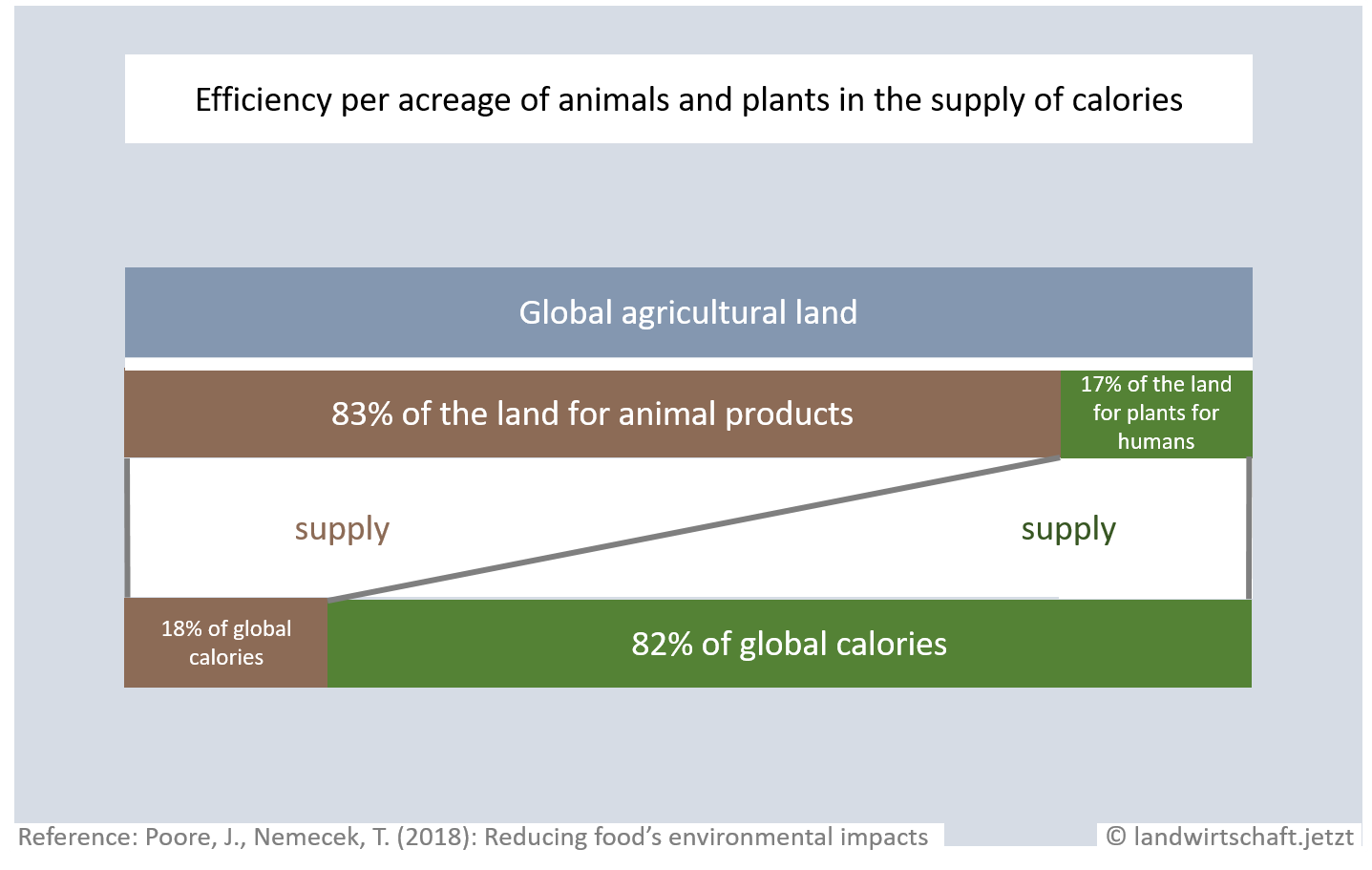 Since the human body does not need animal products, land used for the production of animal products can thus be released. 76% of the areas used for animal agriculture can be afforested and converted into biodiverse grassland [6]. 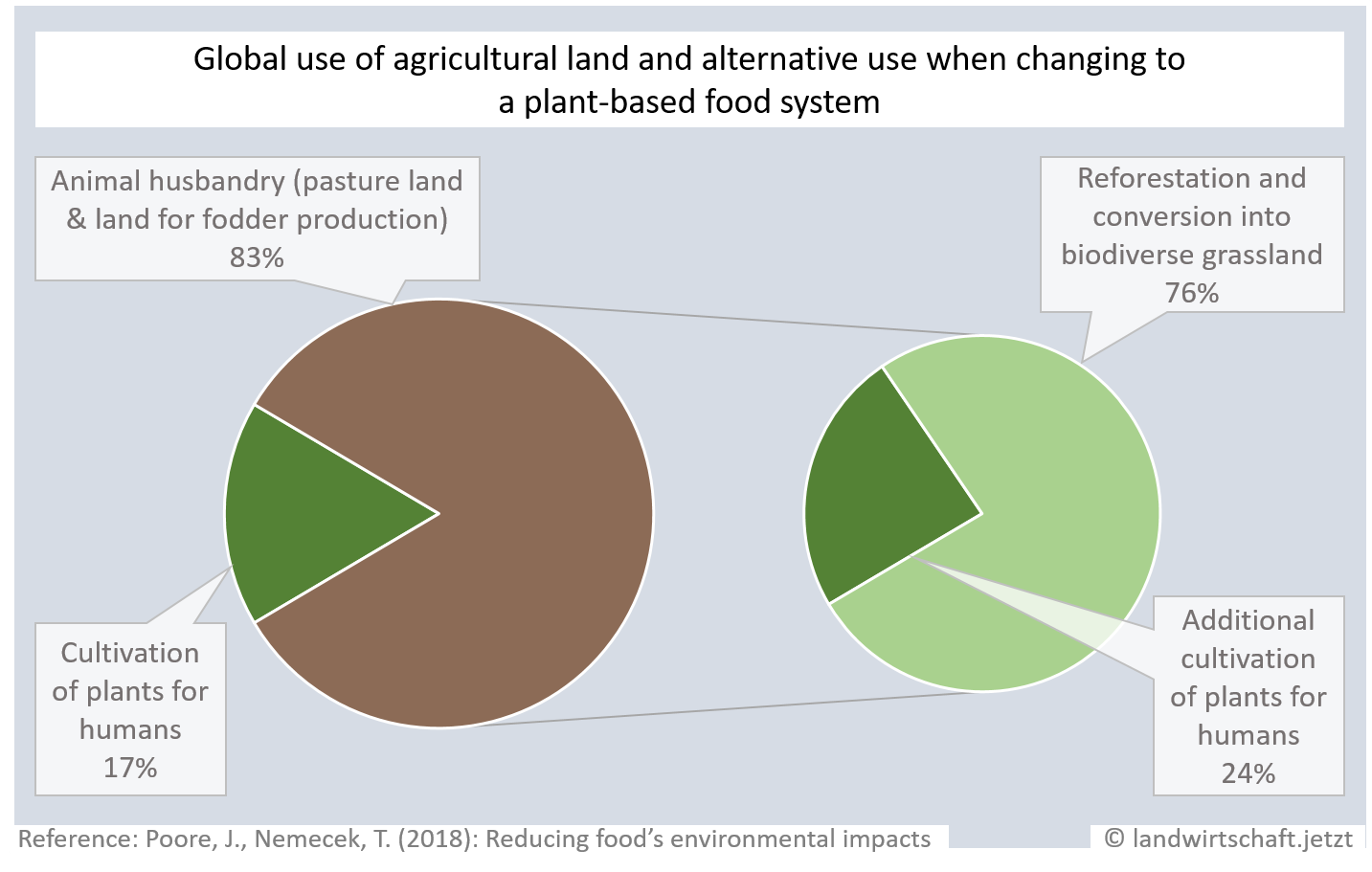 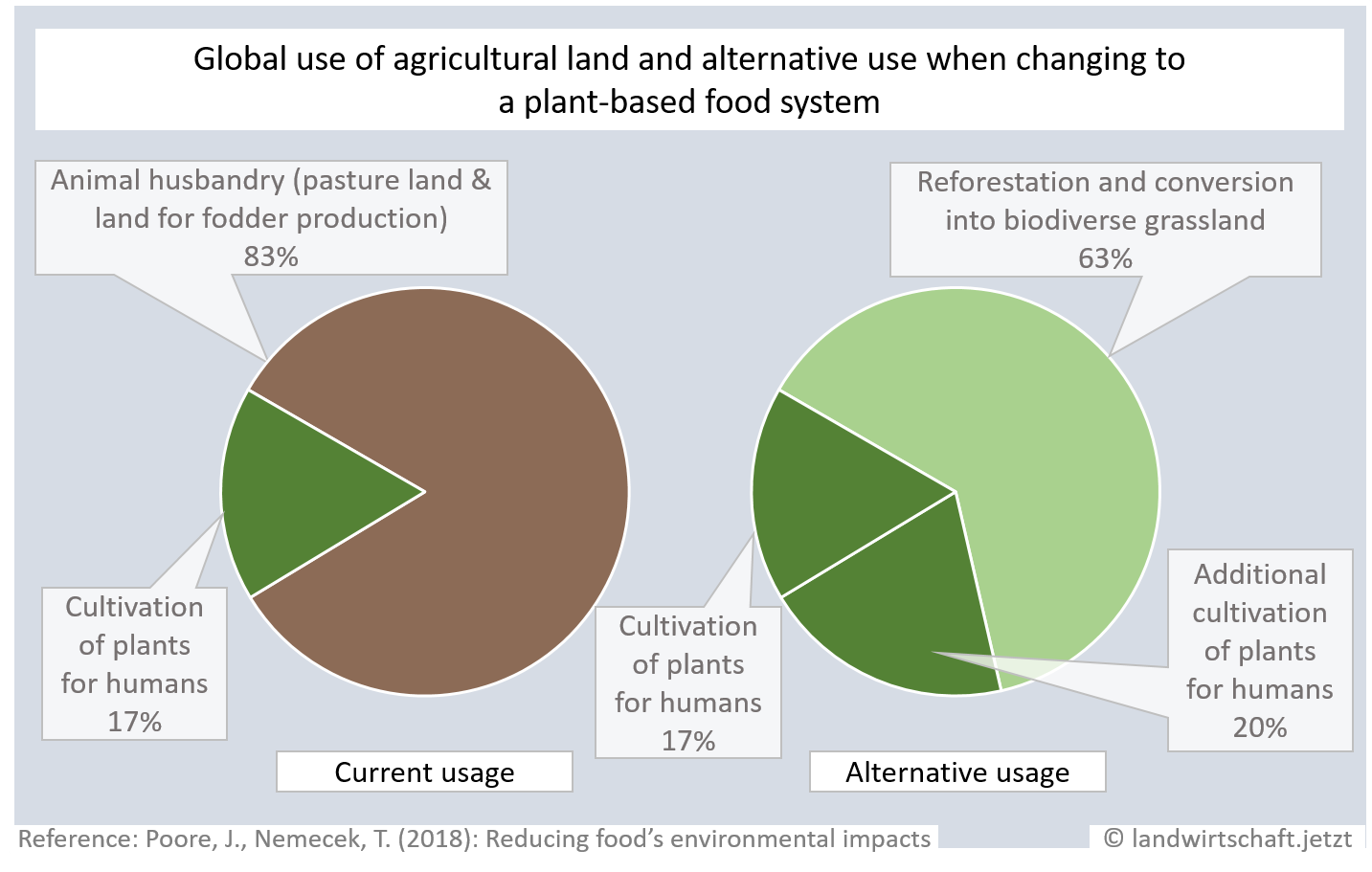 Areas being freed-up by afforestation can effectively counteract climate change and the collapse of biodiversity. Up to 55% of the annual global carbon dioxide emitted by fossil fuels can be captured if land used for animal agriculture is converted into forests and biodiverse grasslands [32], [33]. 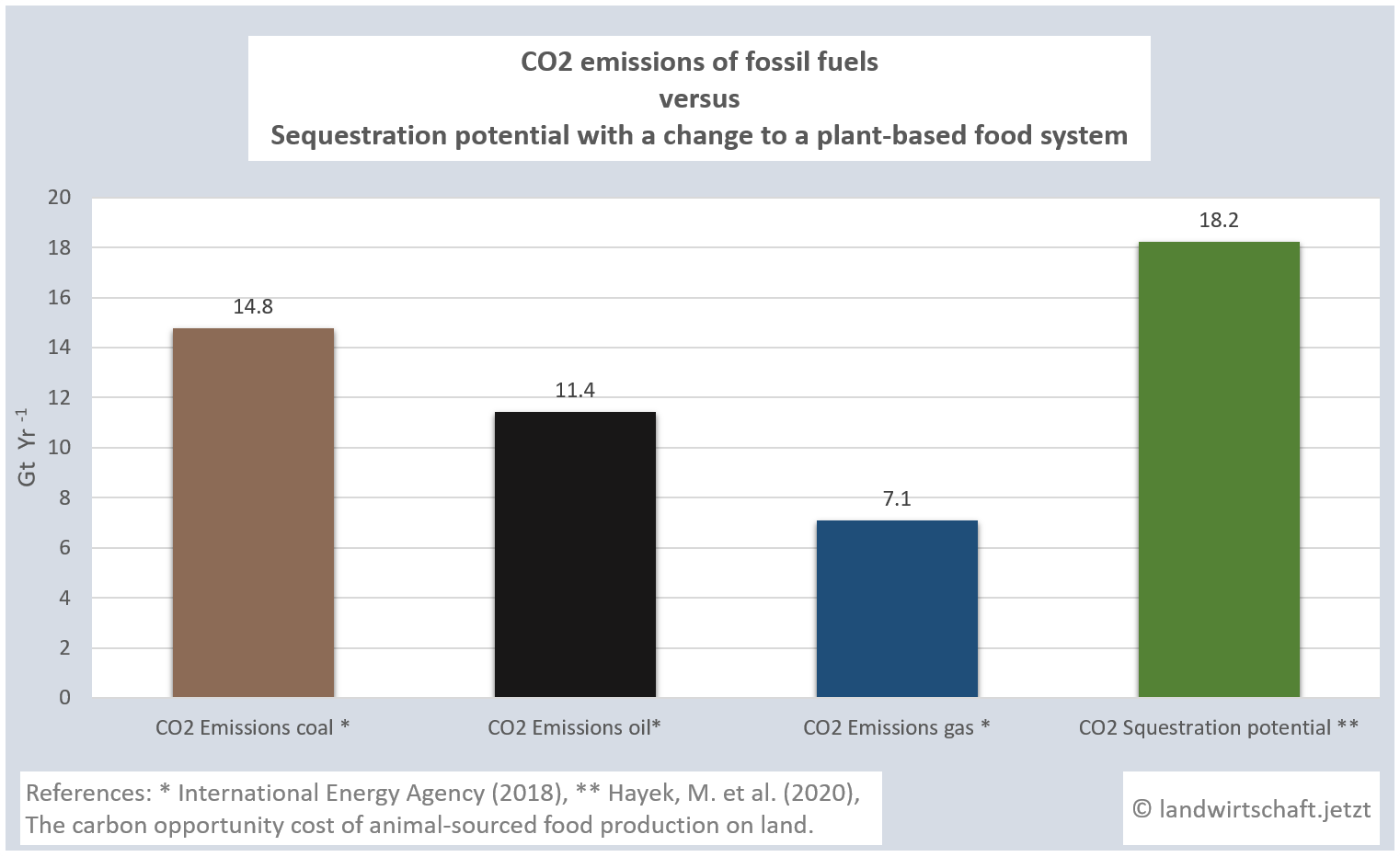